In Doctrine and Covenants 133 we are reminded of the need to “Prepare [ourselves] for the great day of the Lord,” the Second Coming of the Savior, and warned of “those things which are coming on the earth.” We need to establish a spiritual foundation built on our relationship with our Savior to withstand the prophesied plagues, wars, floods, famines, and earthquakes, and have peace of mind.[1]

In his October 2021 General Conference address, President Nelson taught, “When your spiritual foundation is built solidly upon Jesus Christ, you have no need to fear. As you are true to your covenants made in the temple, you will be strengthened by His power. Then, when spiritual earthquakes occur, you will be able to stand strong because your spiritual foundation is solid and immovable.”

President Nelson compared the structural reinforcements being completed on the foundation of the Salt Lake Temple to the need for each of us to reinforce our spiritual foundations. He explained, “The foundation of any building . . . must be strong and resilient enough to withstand earthquakes, corrosion, high winds, and the inevitable settling that affects all building. . . . If you and I are to withstand the forthcoming perils and pressures, it is imperative that we each have a firm spiritual foundation, built upon the rock of our Redeemer, Jesus Christ. The temple lies at the center of strengthening our faith and spiritual fortitude because the Savior and His doctrine are the very heart of the temple.”[2]

On February 14, 1853, Wilford Woodruff recorded his experience at the groundbreaking ceremony for the Salt Lake Temple. Significantly it was an experience shared with not only his 78-year-old father Aphek, but also his 12-year-old son Wilford Woodruff, Jr. He taught that we lay our foundation when we are young “for character which will decide [our] destiny through all time and throughout all eternity, either for good or evil.”[3] Helaman taught his sons that they must build their foundations upon “the rock of our Redeemer, who is Christ, the Son of God” so when Satan sends “his mighty winds … when all his hail and his mighty storm shall beat upon you, it shall have no power over you to drag you down.” They, and we, will be able to withstand temptations and trials “because of the rock upon which [we] are built, which is a sure foundation, a foundation whereon if men build they cannot fall.”[4]

To build the temple Brigham Young envisioned, workers began excavating the area for the foundation.[5] It took almost 18 months for them to dig trenches 20’ wide and 16’ deep along the 120’ width and 180’ length of the temple. Wilford was assigned to supervise the work of the “tithing laborers” in digging the trenches, which began on February 23rd. He worked 210 days in 1853 The cornerstones placed on April 6, 1853 were 2’ by 3’ by 5’ and were made of sandstone brought from Red Butte Canyon, the same stone used to construct the wall surrounding Temple Square.

It took nearly four years to build the 8’ wide and 16’ deep sub-foundation walls. Their daily work was challenging and had to continue for another three years despite harsh conditions including snow, mud, oppressive heat, and other obstacles. We too must focus on the daily tasks of prayer, study, faith, and repentance, in spite of challenges and problems, to ensure our spiritual foundations are deeply and firmly established.

As the construction on the temple foundation progressed, the leveler the chief mason used was not accurate and he decided to add smaller stones between the layers of foundation stones to even it out so the top was flat. In 1857, when President Buchanan sent the United States Army to install the new Governor in the midst of what he thought was a rebellion by the Mormons in Utah, Brigham Young instructed the Saints to bury the temple foundation so the area would look like a plowed field. The trenches that had taken 18 months to dig had to be filled back in, one shovelful at a time, so the 16’ walls were completely covered with dirt.

In 1859, in anticipation of uncovering the temple foundation, Brigham Young commented that they would have to remove the top “tier of rock all over the foundation” due to the small pebbles and chinking that had been placed in between layers of the foundation stones. He believed that the chinking stones “would all crumble beneath the building and one quarter of an inch settling of that building would crack it from top to bottom.”[6]

As with many of us who are resistant to the Lord’s guidance and direction, the process of removing obstructions in our lives and allowing the Lord to help us create a firmer foundation can be painful. After a few years, we too may need to remove some top layers and rebuild or reinforce the foundations we originally established. We also may have imagined our buildings would be much more modest than the one our Father in Heaven has in mind for us and our eternal foundations will need to be much deeper and much larger than what we originally constructed.

In June of 1862 workmen began removing the top layer of foundation stones in order to clear the spawls and level the base of the foundation in preparation for the granite blocks being brought from Little Cottonwood Canyon and carved to fit the temple foundation and eventually build the temple walls.[7] 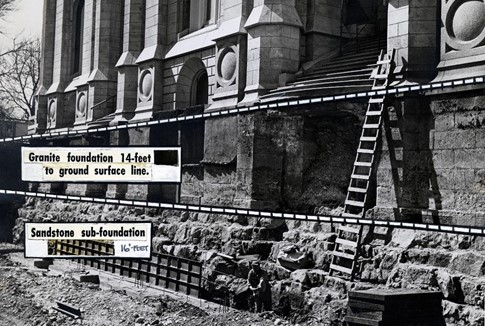 Ten years later, the 14’ granite foundation was completed over the 16’ sandstone sub-foundation and the carved and numbered granite blocks being transported from Little Cottonwood Canyon were ready to be assembled. 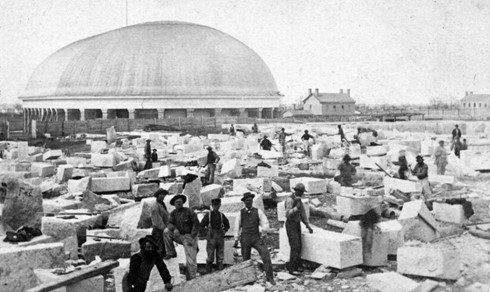 Tabernacle (left) and Endowment House (right) with granite blocks cut for
Salt Lake Temple in the foreground. Temple Square circa 1872. 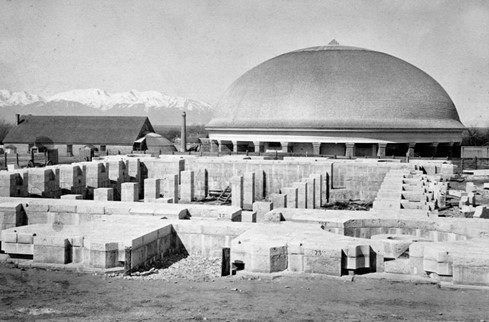 Thirty years had passed since the first Saints arrived in the Salt Lake Valley to establish a refuge “in the tops of the mountains.”[8] Their work building the temple in Salt Lake had been interrupted by the necessities of daily life, slowed by the federal government’s interference and their own mis-steps, but in 1877 the walls reached almost 20 feet high.

Salt Lake Temple walls were about 20’ high in 1877 when Brigham Young died.

It would take another 18 years to complete the 210-foot exterior walls and spires. But the Saints understood that they were constructing the temple not just for themselves or for their children, they were building the House of God. A sacred place where generations would gather to serve and worship.

In the presence of 50,000 people, Wilford Woodruff laid the temple capstone on April 6, 1892. In his address to those assembled he said, “We want to finish the Temple as soon as we can so we can dedicate it to God so we can go to work therein and redeem the dead.”[9]

Few, if any, had a better understanding of the importance of temple work, or as much insight into the role of the living in the redemption of the dead. Of all the nineteenth century prophets and apostles, only Wilford Woodruff participated in the building and completion of the Kirtland, Nauvoo, St. George, Logan, Manti, and Salt Lake temples. In addition, he was one of those to receive the “endowment of power” under Joseph Smith’s direction in the Kirtland Temple and the full endowment administered by Joseph Smith in Nauvoo.

In Salt Lake City, Wilford served and officiated in the Council House in the 1850s and in the Endowment House from the 1850s to the 1880s. Brigham Young asked Wilford to assist in the 1877 dedication of the St. George Temple and to preside over the introduction of all of the ordinances there for the living and by proxy for the dead. In the 1880s Wilford witnessed the first ordinances in both the Logan and Manti temples and participated in dedicating them. He worked with Brigham Young to write down all of the temple ceremonies for the first time in 1877, and later, as President of the Church, he directed the harmonizing of their administration in the four operating temples.”[10]

After the temple’s dedication by Wilford Woodruff in 1893, Isaiah’s prophecy took on new meaning. In his dedicatory prayer Wilford thanked God that He had revealed the powers by which the hearts of the children were being turned to their fathers and the hearts of the fathers to the children. Wilford asked God to confirm upon the Saints the spirit of Elijah so His children “in all their generations can be made partakers of the glories and joys of the kingdom of heaven.” He continued, “We praise thee that our fathers from last to first, from now back to the beginning, can be united with us in indissoluble links by the holy Priesthood and that as one great family united in thee and cemented by thy power we shall together stand before thee and by the power of the atoning blood of thy Son be delivered from all evil, be saved and sanctified, exalted and glorified.”[12]

As they celebrated the end of their forty-year struggle to build the Salt Lake Temple, Wilford Woodruff testified that God had overcome Satan’s designs to prevent the Saints from completing it and serving within it for the salvation of His children on both sides of the veil: “The Lord decreed the establishment of Zion. He had decreed the finishing of this temple. He had decreed that the salvation of the living and the dead should be given in these valleys of the mountains.”[13]

Our salvation and our ability to serve as proxies in the salvation of those on the other side of the veil depends on our worthiness to enter the House of the Lord. Our spiritual foundations will be strengthened as we serve. In President Nelson’s October Conference address, he explained: “Everything taught in the temple, through instruction and through the Spirit, increases our understanding of Jesus Christ. His essential ordinances bind us to Him through sacred priesthood covenants. Then, as we keep our covenants, He endows us with His healing, strengthening power. And oh, how we will need His power in the days ahead.”[14]

In his closing remarks at the end of Conference President Nelson reiterated that: “Nothing will strengthen your spiritual foundation like temple service and temple worship.”[15]

[13] From a discourse at the sixth session of the dedication of the Salt Lake Temple, April 1893. Typescript of Dedicatory Services, Church History Library, Salt Lake City.