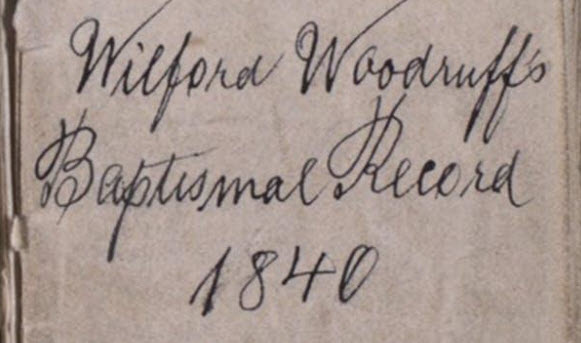 WILFORD’S MISSION AMONG THE UNITED BRETHREN

“The ministers of the Church of England sent three church clerks to see what I was doing,” said Wilford Woodruff, “and I baptized them.” This is only one of the remarkable stories of Wilford Woodruff on his mission to England. Among those who heard the message of the restored gospel in 1840, one thousand eight hundred were baptized, one-third of them members of the United Brethren church.

After initially serving with Elder Turley in Staffordshire, Wilford was inspired to travel to Herefordshire with William Benbow, a recent English convert. William introduced Wilford to his brother John, a member of a religious group who called themselves the United Brethren. The United Brethren were a group of around six hundred individuals and families who had separated from the Primitive Methodist movement.

In Job Smith’s record of his conversion from the United Brethren to The Church of Jesus Christ of Latter-day Saints, he shares the account of two preachers, Thomas Steed and Susan Brooks. The Sunday before Wilford’s arrival, one said to the other, “What are you going to preach today?” The reply was, “I don’t know. I have preached all I know. What are you going to preach?” The other said, “I also have preached all I know. I hope the Lord will send us light.”

The United Brethren were prepared to listen to Wilford’s message of the restoration and eagerly  embraced the fullness of the gospel of Jesus Christ. Some were so anxious to be baptized immediately after hearing Wilford preach, they followed him until 2:00 am in search of a source of water.  Even after finding a location, they had to lower each person down the eight foot bank to reach the creek. (Link to Wilford Woodruff’s Journal March 27, 1840.)

In less than one month, Wilford taught and baptized 45 preachers of the United Brethren church, and 160 other members, in spite of mobs who harassed and assaulted him and local religious leaders who used every means to oppose him, including an appeal to Parliament.

One particular Sunday Wilford preached three sermons in three different locations to a total of nearly one thousand people. That same day only fifteen attended the local Anglican parish. The rector of the parish sent a constable to arrest Wilford Woodruff as he preached his third sermon that evening at the Benbow’s home.

When the constable presented his warrant, Wilford pointed out that he had a license to preach, just like the rector, but would be willing to speak to the constable after the meeting. Wilford recalled, “The power of God rested upon me, the spirit filled the house, and the people were convinced.” (Link to Leaves from my Journal, page 80.)

At the end of the meeting, seven people asked to be baptized, including the constable. The parish rector then sent two of his clerks to listen to Wilford’s next sermon, hoping that they could find out what he was preaching. They too believed his message and were baptized. The rector did not send anyone else to hear Wilford preach.

Ultimately, all but one of the 600 United Brethren became Latter Day Saints, and Wilford and the other missionaries baptized a total of 1,800 people in the British Isles in 1840. Wilford kept a record of the members of the United Brethren who were baptized, noting their names, the locations and date of their baptisms and confirmations, and the names of the men who performed the saving ordinances.

This precious record has been transcribed as part of the Wilford Woodruff Papers Project and is now available online with links to the individuals identified within Wilford’s record. You can search the record here and learn more about the faith of these incredible Saints, their families, and their contributions to the Church and to our shared history of the Restoration of the Gospel of Jesus Christ.