"He Hath Borne Our Griefs, and Carried Our Sorrows”: A Savior Who Succors in “Great Distress”

About seven hundred years before the birth of Jesus Christ, the prophet Isaiah received a revelation from the Lord. “Wherefore, when I came, was there no man? When I called, was there none to answer? Is my hand shortened at all, that it cannot redeem? Or have I no power to deliver?”1 These eloquent words are as much a rebuke as they are an appeal: an appeal to trust God’s ability to redeem and deliver beyond the bounds of human understanding. Isaiah further spoke of a Savior so “acquainted with grief” that He knew how to succor a people to whom grief would be a common companion.2

Wilford Woodruff, like many of the early Saints and prophets, suffered much throughout his life. Wilford lived in an era before germ theory was widely accepted, before most vaccinations were developed, and before tough farm life evolved into the sterilized, modern workspaces we enjoy today. And his life was far from easy.

At age three, Wilford fell into a pot of boiling water, and it took nine months before he was fully recovered. At age six, he narrowly escaped being gored by a bull. At age thirteen, he nearly froze to death in a blizzard, only to survive because a passerby aroused him after he fell asleep in the hollow of a tree. At age twenty-six, Wilford was dragged for three hundred feet between a team of horses, an ancient form of torture that in his case was purely an accident. He was later chased down by mobs and, in one instance, a pack of wolves; was bedridden for weeks as he suffered the bilious fever; and escaped shipwrecks, train crashes, and countless other misfortunes that caused his spirit to “flutter between life and death.”3

His life echoed the sentiments he recorded from one of Orson Pratt’s sermons: “Since I came here my eyes have been saluted with one thing, and that is that death has power over all things that we see.”4

Despite everything, Wilford’s hope in Christ remained, because he knew that these challenges were necessary to prepare him for a higher estate. “It is impossible,” he said, “for the Saints of God to inherit a celestial kingdom without their being tried as to whether they will abide in the covenants of the Lord or not. Any man who undertakes to serve God has to round up his shoulders and meet it.”5

It was Wilford’s faith in Christ and His Atonement, and his hope in a life beyond this one, that allowed Wilford to be healed again and again. His faith was what he depended on  to continue in his service to the Almighty God, though any one of the trials he suffered could have taken his life or broken his spirit. If, in our modern perspective, we are tempted to think that grief and mind-numbing sorrow spare the righteous, then we are not familiar with the lives of most of the prophets that have ever lived.

Portrait of the Prophets by Doc Christensen

It was a fine spring day in 1836 when Wilford Woodruff was ordained to the Melchizedek Priesthood and set apart as a Seventy of the Church. He was barely thirty years old. He recorded the words spoken in his ordination, which articulated keenly some of the trials to come and the power God would give Wilford in overcoming them: “Although my enemies would strive to take my life and confine me in dungeons and prisons, yet God should give me power over my enemies and deliver me out of their hands and from their vaults, prisons, and caves in the name of Jesus Christ.”6

Though Wilford often found himself facing adversaries on all sides, his entries of these encounters were frequently short and sparse, simply noting, “Although threatened by wicked men, we were not harmed.”7 Overall, his entries focused much more on his faith, which was so great that he was able to baptize some of the people who were persecuting him.8 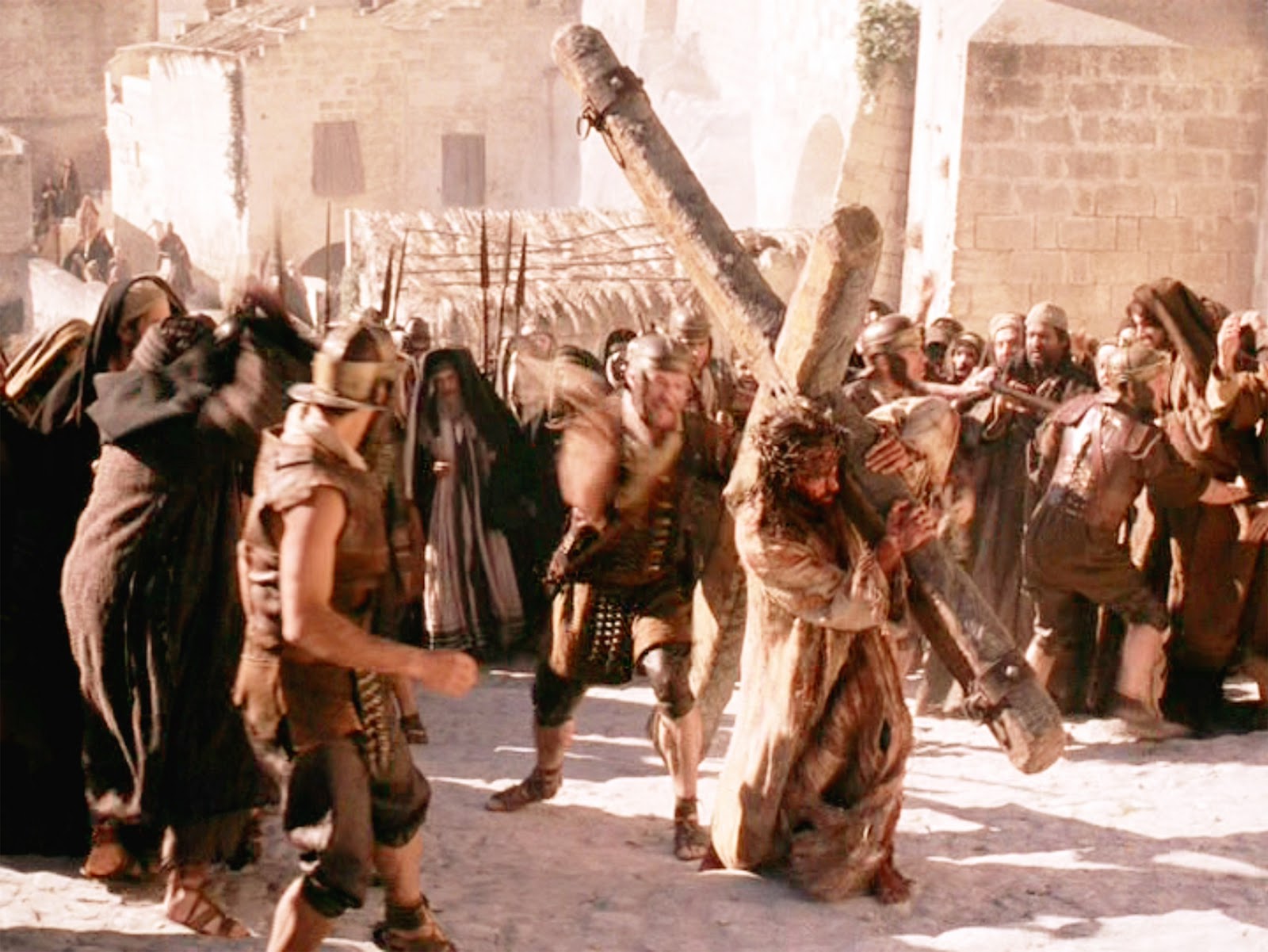 From The Passion of the Christ9

In Isaiah 53:4, we read of a Messiah who “hath borne our griefs and carried our sorrows.”

Isaiah presented a Savior who understood the pain and oppression of His people because He endured the very same. “I gave my back to the smiters,” Isaiah wrote, giving us insight into the Savior’s mind, “and my cheeks to them that plucked off the hair: I hid not my face from shame and spitting.”10 Wilford, through his service as a missionary and during his time as the prophet of The Church of Jesus Christ of Latter-day Saints, came to know others’ shame and intense persecution. But even in the midst of being thrown out of churches where he was preaching, being stoned, cursed, and threatened, Wilford pressed forward, knowing that there was someone far greater who had first “carried our sorrows.”11

Wilford believed not only in a meek and long-suffering God who was able to succor the suffering, but in a powerful God that bestowed miracles and gave His servants power to do miracles in His name. “In the name of Jesus Christ,” Wilford wrote, “the Lord would give me great power, knowledge, wisdom, and faith so that I should heal the sick, cause the blind to see, the lame to leap as an hart, the deaf to hear, stop the mouths of lions and raise the dead to life.”12

Wilford knew that miracles—those of Daniel stopping the mouths of lions and Peter causing the lame to walk—had not ceased with the deaths of the original Apostles, because that same power had been restored to the earth in 1829. Wilford frequently called on the power of Jesus Christ to heal the Saints: old men with fevers, babies struggling to survive, and many afflicted with evil spirits.

In the winter of 1837, a recent convert, Abraham O. Smoot, was possessed by a recurring devil. Wilford recorded, “[He] was again attacked by the destroyer which brought him upon a bed of great distress. We immediately called upon the Elders of the Church. . . . We prayed with and for him and laid hands upon him according to the scriptures, and he was immediately healed of his pain and fever [in the name of Christ].”13 In another case, Sister Margarett Clapp “was instantly healed at the laying on of hands of the Elders.”14

Such a quick, even instant healing may seem miraculous to us today, but Wilford knew that the same God who had struck the earth with famine and rain, who had raised the dead and caused the Red Sea to part, was still a God of miracles. Such miraculous healings were a regular occurrence, almost commonplace, jotted frequently at the end of Wilford’s journal entries.

Miracles can be performed through Jesus Christ’s name in every generation. This was a principle well understood by Wilford and the other early Saints. Sometimes Wilford recorded in his journals accounts of miracles wrought by others through the power of Jesus Christ. One such instance was reported frankly by Brigham Young: “I have laid hands upon people when I knew they would be healed . . . I once laid hands upon a Sister Lake. When she said she had no faith, I told her I did not care whether she had or not, for I had, and I knew she would be healed. I laid hands upon her, and she was immediately healed. I don't know how it is or how faith comes, only as the gift of God.”16

Another of Wilford’s experiences that is particularly poignant occurred in 1837. He wrote, “There was a woman present who was possessed with the devil. She was oft times dumb and greatly afflicted by the evil spirits that dwelt in her. She believed in Jesus Christ of Nazareth and us as his servants and called upon us to cast the devil out of her. According to her request, four of us laid hands upon her and commanded the devil in the name of Jesus Christ to depart out of her and it was immediately done, and the woman arose with great joy and gave thanks and praise unto God, for according to her faith she was made whole from that hour.”17

Wilford was careful not to claim these miraculous acts as his own. Isaiah counseled us over 2,000 years ago, “Look unto the rock whence ye are hewn.”18 Wilford always remembered Christ, calling Him “the Chief Corner Stone,” just as Brigham Young admitted that the faith he had to perform miracles was “only as a gift of God.”19

A Savior For All

Aside from a Savior that understands the oppression of His people, Isaiah teaches about a Savior who is no respecter of persons: good or evil, Israelite or Gentile. ​“Sing, O barren, thou that didst not bear; break forth into singing, and cry aloud, thou that didst not travail with child: for more are the children of the desolate than the children of the married wife, saith the Lord.”20 Isaiah uses an analogy about women and childbearing to remark on the fact that God is no respecter of persons, only of holiness. The children of the “desolate,” or the infertile, shall in the end number “more than the children of the married wife,” because one is blessed for her righteousness and the other is not. It is in this analogy that the prophet illustrates the fact that the House of Israel will only be blessed if they keep their covenants. Wilford too recorded in his journals that every child of God is “called to be baptized without any exceptions: villains, harlots, scoundrel, and all.”21

As often as we see God reprove the wicked, however, we see the Saints being rebuked and corrected. God has high expectations for His people. One winter in 1836, Wilford came out of the temple full of the spirit, declaring that the words of the meeting would be “printed upon [his] heart as a memorial forever.”22 There, “the God of Israel sharply reproved this stake of Zion [Kirtland] through the prophets and apostles for all our sins and backslidings and also a timely warning that we may escape the judgments of God that otherwise will fall upon us.”23 In a day when many Christians called down fire and hell on those who were not of their faith, it is interesting that Wilford most often talked of the way the Saints needed to improve.

Isaiah’s words ring true in our day as well: God is no respecter of persons, only of actions and righteousness. Jesus came to save us all, as unrighteous or sinful as we may sometimes be. “He saves the unworthy,”24 and we are all the unworthy. But to those who think they do not belong in the kingdom of God, “the Lord begins to teach him the things of God and heaven.” He will say to us, “I will make you like myself. I will give you my spirit and make you . . . my family.”25

Mackenzie Jaggi is an editor working with the Wilford Woodruff Papers Project as she pursues her graduate studies in creative writing at Brigham Young University. She appreciates how examining Wilford Woodruff’s experiences recorded in his letters and journals can help us understand our present moments today.

The mission of the Wilford Woodruff Papers Foundation is to digitally preserve and publish Wilford Woodruff’s eyewitness account of the Restoration of the gospel of Jesus Christ. Thousands of transcribed pages are available at wilfordwoodruffpapers.org/documents, including Wilford’s journals, missionary records, dreams and visions, autobiographies, and histories.

Please join us in this effort by contributing your time as a volunteer or your financial resources to support the transcription and research teams. Learn more at wilfordwoodruffpapers.org/volunteer.

Some original text has been edited for clarity and readability.